WHY AGENCIES NEED TO GET CLOSER TO BE MORE EFFECTIVE

2015 has been announced as the year of the in-house agency. Brands are finding that bringing creative and digital talent in-house helps them deal with disruption more efficiently. But why is this more effective? OLIVER Content Marketing Manager, Carina Jeppesen, looks at the trend.

You don’t have to look far to notice the change that’s happening in brand-agency relationships. The topic of brands bringing talent and creative resource in-house has been trending for the last year.

The marketing media have warmed to the controversy that in-house agencies introduce. Marketing Magazine published an article in late 2014, discussing how digital is putting strain on the classic client-agency relationship and suggested three in-house alternatives to the traditional agency model. Campaign claimed that 2015 would be the year of the in-house agency, simply because they help brands deal with disruption more effectively. Backing that up, Marketing Week revealed results from research conducted by the digital society SoDA, saying that 27% of brands now claim to work with no agencies on their digital marketing due to bringing talent in-house – a figure that’s more than doubled in a year.

Why are brands opting for unconventional agency solutions?

This is exactly the topic OLIVER ECD, David Shanks, sought to tackle when speaking at Cannes Lions 2015. In front of hundreds of festivalgoers, he challenged traditional communications thinking. 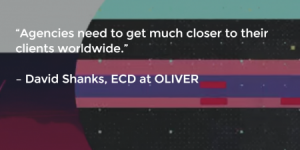 “Our agency world has been getting further and further away from our clients.” Shanks suggested that communicators had a challenge to address – moving from being viewed as a reactive function to a proactive one. A function that is engaged with the outside world of consumers and more connected with the inside world of clients. A task that is only made easier through proximity to brands, their challenges and their thinking.

Shanks suggested that traditional thinking was lagging behind, because of the inability to view time as a creative asset. “We need to turn the positive management of less time to do things into real, long-term, brand building, strategic creative differentiation. Less time is now the most potent creative asset in the world.”

“Developing ideas within the new quick-is-good mindset is one which too many agencies fundamentally refuse to positively recognise.” In the modern world, business agility plays a great role in campaign success. Shanks claimed that by mixing unlike-minded individuals and creating true collaboration between brands and agencies, we set the foundation for creating more successful and provocative ideas.

Real-time communications also present a challenge for traditional thinking. “Marketers simply don’t have the time to relay critical or highly relevant data to people who are not living the experience in the same way they are.” 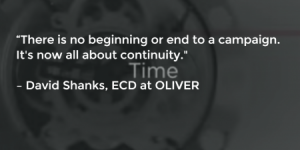 Shanks hinted at what he feels is the solution to the traditional client-agency relationship, “Managing time as a creative asset is now all about intimacy through proximity.” He asked the audience, “What if it were possible for clients and agencies to work together through mutual, closely linked, extremely well-connected centres or cells of creative intelligence?”

Shanks suggested that the benefits of this were manifold for both agency and brand. By being closer to brands, in-house agencies are able to create more effective content that realise the ambitions of both brands and their customers. In-house agencies are able to facilitate true empowerment through instantly shared knowledge and understanding. They’re able to change and reshape, providing a buffer for the organisation in times of disruption. And, as a result of being closer to the client, they’re simply faster, smarter and more productive.

OLIVER turns the traditional agency approach on its head by creating dedicated agencies for each of our clients. This allows them to be more closely aligned to the strategy and environment of the client, delivering better creative work, faster. If you’re interested in having a chat about what a dedicated, in-house agency could do for your brand, get in touch.

In is the new in. A Cannes Lions speech. from OLIVER

The Art Of Transcreation

2015 has been announced as the year of the in-house agency. Brands are finding that bringing creative and digital talent in-house helps them deal with …